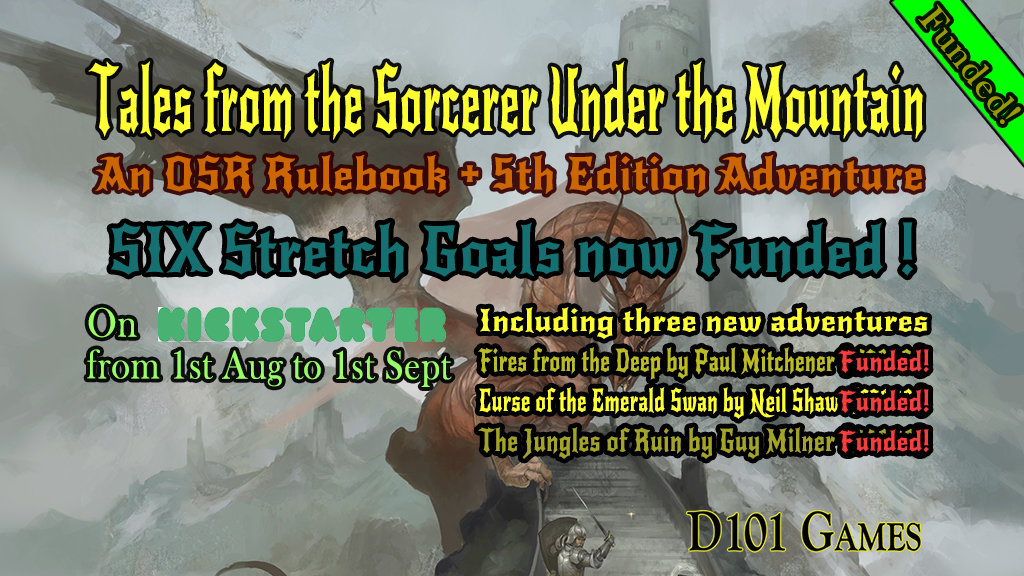 Seeing as the book is laid out and ready, pending a final proof, I throught it worth posting a preview on the campaign page.

This twenty-two pdf, has the contents page, the introdution, severn pages of the adventure and the two versions of the character sheet (on standard and one for using the house rules included in the book).

The 5th Edtion version is currenly being laid out, but will use the same art and basic layout but be a larger 8" by 11" format softcover.

Both books willl be ready for the end of the campaign, they are going through final layout and proof now.

Currently are 8 backers away from the next Monsters are Peeople Too pdf, and £123 away from funding the third stretch goal, the one on one adventure, The Castle of Howls.

Earlier today Stretch Goal #2 funded, my advice for OSR Referees moving over to 5th Ed which is now in the 5th Ed Adventure and as a pdf for everyone by the time the campaign ends.

From now on in its all the stretch about adventures, which will be available to all backers who backed a book as a free Pdf and with the option to get in print via POD when they fund. Starting with Stretch Goal #3 The Castle of Howls.

The details of the first adventure I played are hazy after 34 years. I twelve and was playing Red Box Moldvay Basic and my friend was the Dungeon Master. My character was an Elf, and the adventure took place in a ruined castle. I fought skeletons, snuck past some living man eating plants in a corridor and wrestled a giant boa-constrictor for a large emerald worth 100 GP! Eventually, I nearly got killed by a ghoul at the end of the adventure. The character barely made it out alive but had gained a Ring of Invisibility and a small fortune in gems and gold. I was happy and wanted more.

The Castle of Howls is my attempt to recreate that adventure. It’s a one on one adventure (one DM one player), and there will be an OSR version and a 5th Edition of the adventure in pdf. All backers who are backing a book will get a copy.

The Castle of Howls is a ruin on the coast. The local fishermen say it is haunted, and occasionally, people go missing there. That’s certainly the case of Lady Gillian. She was a honourable crusading knight who went to the Castle, seeking to drive out whatever evil has taken up residence there. She’s been missing for two months now.

Now the Council of the Moon, a group of Elvish monster hunters, have sent you, one of their members, a fierce Elvish Warrior-Mage to find the Ring of the Moon, which is the magical ring that Gillian was wearing at the time of her disappearance.

It is midnight and the full moon illuminates the night sky. You stand on a beach by the lower entrance to the castle, a doorway at the base of the cliff that that castle is built on. Beyond this weather-beaten portal is a long spiral staircase that leads up into the dungeons of the castle. You prepare yourself for a long climb up through the darkness.

Also the next Communicty Stretch Goal has been reached with 100+ backers now on board, so you'll also be getting  Lady Gillian the Ghoul as a Monsters are People Too pdf too.

Stretch Goal 1, Character portfolio pdf has now funded. Which means that I'll be creating six characters suitable for use with at the adventure Sorcerer Under the Mountain in both OSR and 5th Ed Format. The portfolio will be available when I ship the pdfs for the OSR Rulebook and the 5th Edition adventure immediately after the campaign ends.

Next up is stretch Goal 2, Confessions of an Old School DM, which go in the 5th Edition adventure and available to all backers as a pdf. This short article will explain how I successfully moved from running Basic-Expert/1st Ed style games to 5th edition, which is in many ways, a very different game with a different play style. I hope it will be of use to anyone in the same position, who has a lifetime of experience with earlier editions ( because that's what they grew up with) who wants to run 5th Ed but are currently struggling with it.

After this is Stretch goal 3, where I faithfully, as far as my memory allows, recreate the first game I played in, to provide an introductory one on one game in both OSR and 5th Edition format.

Remember to spread the word via social media. We are but two backers away from reaching the next community stretch goal, and the third Monsters are People Too pdf :)

So we meet yesterday's challenge of 90 backers about a couple of hours ago today. However since its the weekend and slow by default, and a fair few folks did tweet about it, I'm going to mark this as a win.

Therefore Pugsly the Goblin will be joining the Halfing Shire Dog Rider from yesterday, in a pdf called "Monsters are People Too". Pugsley is a down at heel Goblin Scout, who is a thrall via threats of violence to a local Orc Warlord. He sneaks around in the shadows, avoiding larger monsters, scavenging for food, bits of treasure and looking for the rest of his clan, that was decimated by invading Orc Slavers.

Back in the 1980s, my turning point in roleplaying games was the idea that monsters could be just as rounded as characters, with their backstories, desires and network of contacts. White Dwarf 38 & 71 featured a two-part article called Monsters Have Feelings Too, which cemented this idea in my head.

Each NPC will come along with the stats for both 5th edition and Swords, and Wizardry lists their connections, history, quotes, goals, beliefs, typical reactions to others and gives some adventure hooks.

So here's the schedule

So get out there, spread the word on your favourite social media channel. Tell your friends. The more backers the campaign gets, the more Monsters will be detailed like people and added to the pdf.

I've just added a high tier reward to the campaign, for those who want everything the campaign produces in print, signed and sent directly to them.

Sorcerer Under the Mountain (£100)

You are the Sorcerer under the Mountain! With your own Dungeon Lair and personal monster army.

Get both the OSR Rulebook + 5th Edition adventure in print +pdf, signed and sent directly to you.

Also, any additional stretch goals which fund and have a printed version, such as the extra adventures, will be signed by the author and sent directly to you.